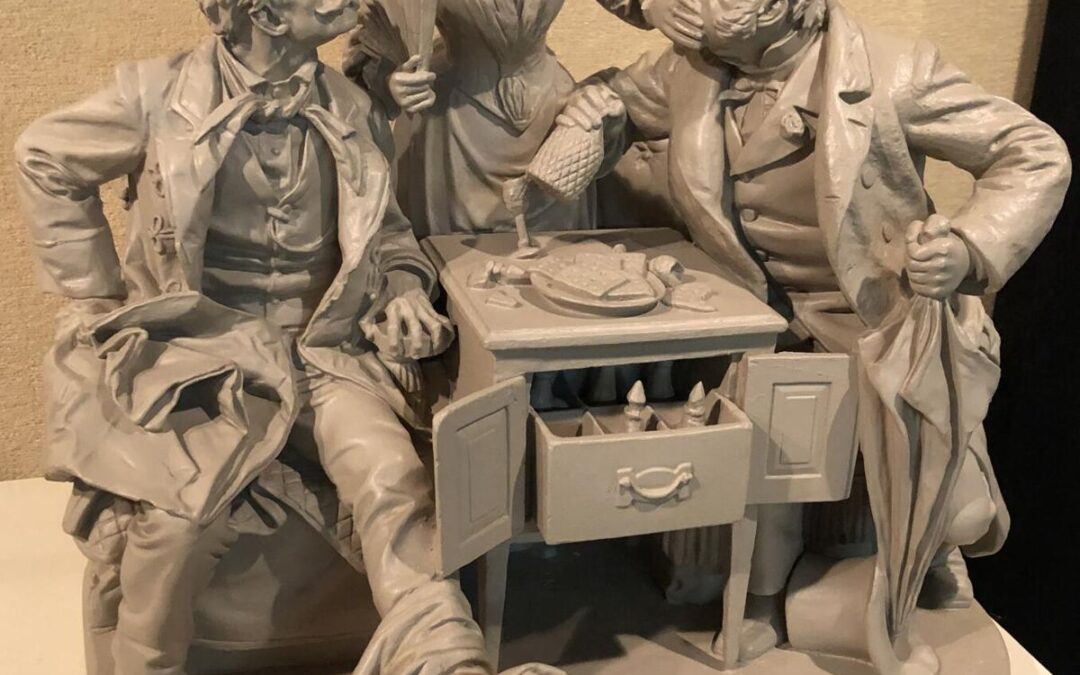 Two close-up photos show young Black children holding “Black Lives Matter” signs at a Chicago protest this year. Like a cross on a wall, they flank two hand-colored lithographs of a white boy and girl with their hands folded in prayer, both published by Currier & Ives in 1890.

And the blockish image of a former mayor, “Pixel Pete,” hangs down the exhibit from a cross formed out of chrome bumpers, back when you still found chrome on cars.

Museum Director Brian Byrn didn’t just arrange 150 years’ worth of art with a wide range of political and religious messages in the “Politics & Religion” exhibit at the Midwest Museum of American Art. He purposefully grouped them so that they’d “jostle people to think.”

The eclectic array of 129 pieces from 32 living artists and 17 historical artists, some borrowed and some from his own personal collection, are on display through Oct. 2. Byrn says he started conceiving of the exhibit three years ago, but not with a political agenda. He did want to time it, though, before the November elections and on the 100th anniversary of women’s right to vote.

“The museum should be seen as a safe, neutral environment where people can engage on any level,” he says. “I want both Republicans and Democrats and libertines to come to the museum to think about the markers that artists have been thinking about for a long time.”

He points to a poster that merely restates a quote, apparently paraphrased from a letter from Belgian King Leopold in the 1840s: “Beware of artists; they mix with all castes of society and are therefore the most dangerous.”

That’s near an 1888 painted plaster sculpture by John Rogers, titled “Politics,” that smacks of Norman Rockwell’s detailed, human style — with a woman laying one hand over an angry, portly man’s mouth at a small table of snacks and drink as another seated, slender man looks intently at her. In fact, Byrn said, the piece is from the museum’s Rockwell collection, and Rogers’ works influenced Rockwell.

The notion of politics here is broader than just candidates and elections. The exhibit also explores issues that trigger our emotions.

Cartoonist Garry Trudeau’s 1981 poster for National End Handgun Violence Week hangs above a mixed-media sculpture from 2017, titled “Nature’s Return,” in which Elkhart artist K.D. Sleeper uses warped rifles that he’d salvaged from a house fire, next to a bird nest with three eggs, yellow flowers and other greenery sprouting from a blackened heap.

President John F. Kennedy’s head, set in plaster, looks at a 1969 poster with an arty nude that advertised the Woodstock Music & Art Fair in Wallkill, N.Y., before an outrage in the town moved the soon-to-be famous fest of peace, love and rock music to a farm in Woodstock itself.

Steve Moriarty, who’d worked as a photography curator at the University of Notre Dame’s Snite Museum of Art, has a gritty photograph here, hand tinted with coffee, that he’d shot of a man showing a sewn-up scar across his stomach, titled “San Sebastian, El Salvador,” from 1996. Byrn says the man was a drug mule who’d been slashed.

In recent years, South Bend artist Helen Geglio embroidered and stitched a white blouse, lace, linen and cotton fabric to depict the towering inferno of 1911 that killed dozens of girls and women working in a New York garment factory, a tragedy that led to changes in labor laws.

“I used a delicate shirtwaist blouse from that time to imagine a terrible choice,” Geglio writes. “To perish in the flames or step off the window ledge.”

Surely the late Rev. Anthony Lauck, a sculpture professor and former director of Notre Dame’s Snite Museum, didn’t think politics when he carved a face out of black walnut in 1981, titled “The Prophet.” When asked why it’s here, Byrn explains, “I think everybody’s looking for a prophet.”

It sits next to a polyester resin sculpture of a cross in layers of subtle color, “Living Water,” by the late Brother Carl Tiedt in 1987.

But, in a 1950s oil painting by the late Roman Radecki of South Bend, whose family had run a local art framing business for 60 years, a skeleton walks past a tilted crucifix and a barren, smoldering landscape, titled “The Last Realist,” that depicts a nuclear holocaust. Radecki was a Catholic and World War II veteran, fluent in Polish, who was affected by his work of helping displaced people after the war and by the atomic bombing of Hiroshima and Nagasaki.

Buchanan photographer Lisa Kiselevich captures the protest culture of 2020, while Kay Westhues of South Bend shows recent slices of rural life, including a family with their van in Ligonier, Ind., that proclaims “REPENT.”

The exhibit is sprinkled with magazine, book and newspaper covers of the time, because, Byrn says, “It makes it seem more real; art can sometimes seem like it’s from another world.”

It includes a signed cover of Time magazine when it named New York’s mayor at the time, Rudy Giuliani, as “Person of the Year” for shepherding the city after the 9/11 tragedy.

A pixelated Pete Buttigieg, South Bend’s mayor when Ben Roseland of Granger painted “Pixel Pete” with oil in 2016, hangs above a work from that same election year, “Impossible Picasso,” by Roni Balthes, showing candidates Hillary Clinton and Donald Trump as they face each other eye-to-eye and lip-to-lip.

There are many other interpretations to unravel here from across the decades.

Artists and their art, Byrn says, “have a long memory.”