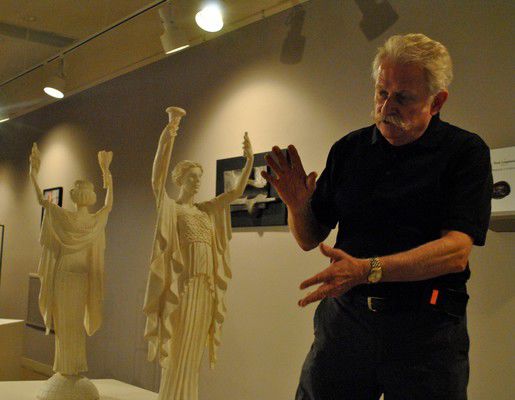 ELKHART —  In the midst of Elkhart’s entertainment revival, the Midwest Museum of American Art is celebrating its 40-year anniversary.

Museum director and curator Brian Byrn said in his 38 years at the museum, he’s never seen anything like the artistic revival taking place in downtown Elkhart today.

“We see now more than ever before city governments, mayors, administrators, waking up to the fact that we need stuff like this. We need a Lerner Theatre, we need an art museum, we need a historic home like Ruthmere, we need a Wellfield gardens, because it makes our communities vibrant, more liveable, a happier place to raise your family and more intellectually engaged,” he said. “City governments find that when you promote art, it attracts and creates positive, vibrant communities.”

The museum is unique in that it specialize in art created regionally.

In it’s special 40th-year exhibition, for example, the museum is featuring the work of Granger-based artist Tuck Langland, a sculptor and retired professor at IUSB, who is known internationally for his monument-sized bronze statues, featured in hospitals, churches, museums, gardens and several private owners.

Langland has won numerous teaching awards, including the prestigious Lundquist Fellowship and was elected professor emeritus when he retired.

Langland was elected into the National Academy of Art and achieved the rank of fellow in the National Sculpture Society.

Illustrated with examples of sculpture produced during each period, the exhibition curated by Byrn over a nine-year period, features 57 sculptures, five drawings, two paintings of the artist and more.

The exhibition, on display through June 28, is just a small portion of the museum’s 6,800-piece collection.

When museum founders Jane Burns and her husband created the public foundation for the Midwest Museum of American Art, there were no pieces owned to display.

“I started as a young man at the age of 23, right out of IU Bloomington, and I was in the right place at the right time,” Byrn recalled. “In 1981, there was five full time people running the museum. The museum had no collection. When I arrived two and a half years later, there were 224 works in the collection, and today there are more than 6,800 works in the collection. At any given time, there is between 1,000 and 1,200 works on display.”

The museum boasts items in its collection from nearly 500 different sources.

“Now, our support comes, not just from the region, but quite possibly the country. Our collection alone has been provided by almost 500 sources. It has a presence on a larger stage.”

Four years ago, Byrn became director, and by that time, it was just him and Burns herself maintaining the museum.

“Because she was a trustee, she could not take a salary so she volunteered her time unselfishly. I remained for several years the only full time paid staff person, but we had a series of part-time staffers to make this operation grow.”

Last year, the museum added its third full-time employee, Randy Roberts, at the behest of Byrn.

“As he was graduating, I knew he was building his career and he had a high GPA and he was destined to fly, so I brought it to the attention of the trustees that they may miss an opportunity because I can’t do this with just volunteers.”

Roberts joined the museum four years ago, but became the full-time assistant curator in July of last year.

“Every day is a new challenge and a new adventure. You never know what’s going to happen or who is going to contact you,” Roberts said. “To be working hands on with this collection, these important pieces of art history, it’s something that textbooks and being in the classroom can’t provide. This is a chance to engage on a deeper level with this artwork and this collection.”

As curator, Burns finds a similar love of for the artwork in the collection.

“I love art. I love things. I love stories,” he said. “I love the way that people connect to a visual image or an object like a sculpture or a photograph or a piece of pottery.”

He asserts that anyone can find that same enjoyment in art museums.

“People are interested in their own personal story. When you come here, you connect because of something that has happened to you,” he said.

“For people to understand museums, you’ve got to go back to the first museums. To Alexandria, and realize that the first museums were libraries of knowledge, sometimes of one of a kind scrolls. They were sacred, hand-made by monks. I don’t think the hand-made will ever go out of style as long as there’s humans,’’ Bryn explained.

“Elephants might be able to paint with a paintbrush in their trunk, and of course I’ve seen a pig who painted pictures, but they’re not human. Humans create art. All that other stuff if just an oddity. Human minds create things, and sometimes it’s rockets that go to the moon and beyond, and other times it’s a painting of that rocket. We all can’t be astronauts, and we all can’t be artists, painters and sculptors, but we can appreciate it. We all have that inclination to be creative,” he added.

Byrn said he believes that after basic human needs are met, in order for a society to be vibrant, it must have a flourishing arts and entertainment industry.

“You’ve got to have something that feeds the creative nature of humankind. Everybody is creative. People just don’t know how to recognize it sometimes. Every person has creative inclinations. It may start with waking up in the morning and going to their closet and picking and choosing the costume that they’re going to present themselves to the world in that day. It may be the design of the vehicle that’s going to transport them. It may be the edifice that they inhabit and the environment that they create around them that makes them feel engaged.”

“Art doesn’t just hang on walls or stand on a pedestal. Art is the very fiber of human instinct. It’s coded into our DNA and what we want to do is help people unlock that,” he said.

In celebration of the museum’s 40th anniversary, Tuck Langland will have a Noon Time Gallery Talk at 12:20 p.m. Thursday, June 6. Admission for the talk is $5.

A catalog of “The Tuck Langland Collection: A Biography in Sculpture” has been published by the Midwest Museum of American Art and is available for $25.

The Midwest Museum of American Art is open 10 a.m. through 4 p.m. Tuesday through Friday, and 1 to 4 p.m. Saturday and Sunday.