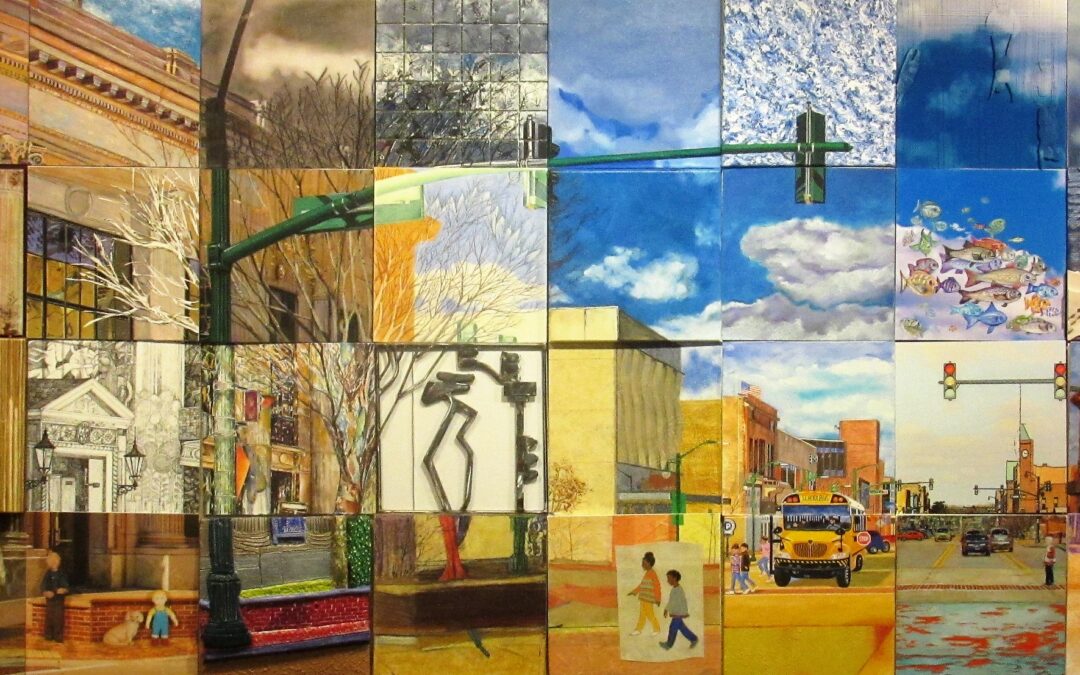 ELKHART — To commemorate the Midwest Museum of Art’s 40th anniversary a collaborative all-media exhibit was conceived by artists Kathy Zienty and Todd Hoover.

Their idea was to create a large, 4 x 10-foot mural of the museum as viewed from the intersection of Main and Marion streets in downtown Elkhart.

Being the coordinator of the project Zienty shares how this idea emerged, “I was having a conversation with Todd Hoover about collaborative murals. As a former teacher Todd had supervised

the making of murals done by his students and I have painted many murals for various clients. It occurred to us that a mural in honor of the museum’s 40th anniversary would

be an interesting and creative project in which we could use the talents of 40 different artists who are involved with the museum.”

Following this conversation they began to develop the project further.

Together, they engaged with Earl Vandygriff to compose a photograph of the environment. The resulting image was then divided into 40 4×4 square inch images that were dispersed to 40 Michiana artists.

In selecting the artists to participate Zienty said, “we sought to have a variety of styles, techniques and mediums throughout the mural.”

The artists would then interpret and enlarge their image onto a 12×12 square inch surface in their respective media and styles.

This mural illustrates a community of creative minds that live in Michiana and it celebrates the cultural offerings available on Elkhart’s Main Street.

The finished product has been installed in the museum’s ‘spotlight’ gallery along with a key image that indicates the 40 Michiana artists who participated.

The exhibition will be on view at the Midwest Museum of American Art through Saturday, Sept. 28.

Meet some of the participating artists on Thursday, August 22 beginning at noon.