Karen Bondarchuk: Martins in the Field 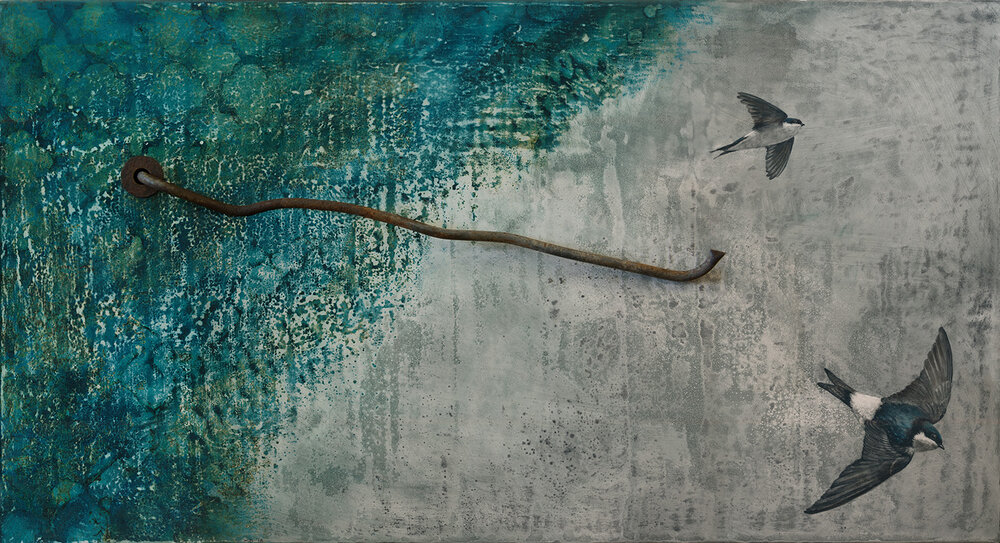 The Midwest Museum of American Art is pleased to announce a new exhibition featuring the artwork of Karen Bondarchuk. The exhibit will open on Tuesday, June 16 and continue through Sunday, August 2, 2020.

Karen Bondarchuk, a Canadian visual artist living and working in the United States, has exhibited widely in the U.S. as well as Canada, England, France, Italy and India. She is a professor and foundation coordinator in the Frostic School of Art at Western Michigan University in Kalamazoo, MI.

The artist speaks about the series “Martins in the Field” and how it is a metaphor for her Mother’s personal journey of dislocation, resilience, and dealing with Alzheimer’s as she states, “my mother’s maiden name was Martin, which initially inspired the use of the common house martin in these works, a bird my mother would certainly have known as a girl in London in the 1930s and 40s. In contrasting these endearing birds with scraps of deteriorated metal and a turbulent atmospheric backdrop, I aim to evoke tonalities of feeling that have accompanied me since her death: the pervasive sense of in- between-ness that I often feel is part of existence, and a kind of longing for escape. My mother’s life was one of dislocations, starting at an early age when she was taken abruptly from England to Canada as a fourteen-year-old and continuing throughout her life until her final seven years with Alzheimer’s, her dislocation from herself. The employment of such animals in my work is a means for me to explore the territory between humans and non-humans, and a way to (often humorously) put myself in the pelt (or feathers) of another. Having spent the last several years and countless hours observing birds generally (both in the wild and in captivity), and being smitten with corvids specifically, I am increasingly aware of the extent to which these gregarious creatures have become co-conspirators in my work, and the degree to which I have allowed that to happen.”

The exhibit will open on Tuesday, June 16, and continue through Sunday, August 2, 2020.