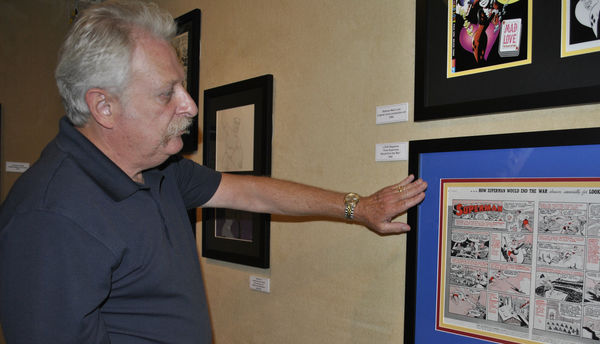 ELKHART — A collaboration between the Midwest Museum of American Art and the Hall of Heroes has resulted in an opportunity to view a unique collection of comic history.

The Bam! Pow! Swoosh! Comic Book Exhibit will be on display at the museum through Sept. 21 and helps celebrate this year’s Comic Con set for this weekend in Elkhart.

“Last year in March, I looked out the door and saw these throngs of people going to the Comic Con,” Brian Byrn, curator for the Midwest Museum of American Art, said. This year, the Hall of Heroes Comic Con will take up three city blocks and again encompass the Lerner Theatre, but this year they’re expecting a 50 percent increase in sci-fi fans and expecting nearly 15,000 guests this Saturday and Sunday.

“It cuts across generations,” Byrn said. “My grandparents and my parents would have been alive during the Depression when the first Superman, the first Detective, comic was published, even the first Batman.”

The exhibit at the MMAA features original inked pages, drawings and their animation cells, printing plates, sculpture and much more. The earliest piece in the exhibit is a tear sheet from Look Magazine, dating back to 1940, a vintage double-page spread detailing in comic how Superman would end World War II. The publication was released before the United States ever entered the war.

“I had already done at least two exhibits on the American comic strip, original works that were traveling around the country,” Byrn explained. “The comic book is organized after the comic strip. Comic strips illustrated the newspapers and later magazines. Then you linked all those strips together, they became more than just a page in the Sunday funnies, they become an extended story.”

Byrn explained that there were two primary purposes of the exhibit: “to drive the audience to our door and expose them to the multimillion-dollar collections the museum has acquired in its 40 years now. The second was to help maintain the efforts to keep the Hall of Heroes here in Elkhart.”

There is some concern among superhero-lovers that the facility could leave town.

Hall of Heroes’ curator Allen Stewart has been looking to upgrade the property for a few years now. Stewart will need about 10,000 square feet to expand the collection and present it well.

Comic Con attendees will be helping the Hall of Heroes to stay in town simply by visiting the Midwest Museum of American Art.

Half of Comic Con ticket holders’ $10 admission will go toward the Hall of Heroes.

“It’s an opportunity here in the arts and entertainment district to reach out to the public. We’re constantly looking for ways to engage with the public in an educational and informational way,” Bryn said.