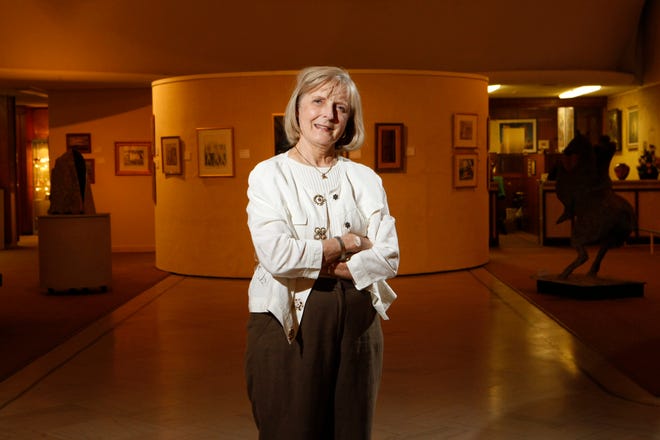 For decades, Jane Burns was an active participant in a wide range of cultural spheres in Elkhart and South Bend, but her most lasting contribution was the work she put into running the Midwest Museum of American Art, from its founding until her retirement in 2015. She died Dec. 7 from ovarian cancer. She was 81.

Born Billye Jane French on Nov. 1, 1940, in Yeager, Okla., she married Dr. Dick Burns in 1960. Dick’s work with the U.S. Public Health Service and the U.S. Air Force required a peripatetic way of life for the first few years of the marriage, but after living in several different cities — including Tokyo — the couple moved to Elkhart in 1967, and stayed for the rest of their lives.

In 1978, Jane and Dick created the Midwest Museum of American Art, serving as its founding trustees. Brian Byrn, Jane’s successor as the museum’s director, says the worldwide profile of American art has blossomed since then, but at the time, the art world was still so dominated by the European influence that it was fairly bold to dedicate a museum only to American artists.

Although Dick remained involved, Jane took the helm for most of the decisions about the museum’s acquisitions. She built a collection that reflected the vast panorama of styles and sub-categories of American art, ranging from iconic mainstream figures (Grant Wood, Norman Rockwell) to modernists and avant-gardists such as Roger Brown and Arthur Bowen Davies. Jane also brought in juried competitions, which helped boost the museum’s profile beyond the immediate region. All the while, the accumulation of items in storage in the permanent collection began to reap dividends. In 1981, there were 224 pieces in the collection; the number is now more than 7,500. Jane realized she could have Byrn identify and curate exhibits from within their own holdings.

“In 2006, Jane told me that traveling exhibits were getting too expensive, and we just couldn’t afford all those canned shows anymore,” Byrn says.

Alongside the traveling and homespun exhibitions, Jane and Dick cultivated relationships with living artists, most notably sculptor Tuck Langland. Dick’s commitment to a high-dollar acquisition of one of Langland’s seminal early works, “Venus Natarani,” was a crucial step, and the relationship only deepened from there. In 2019, the museum presented a survey of Langland’s career in a show titled, “The Tuck Langland Collection: A Biography in Sculpture.” Byrn is currently working on curating a further exhibit, to be called “Tuck Langland: Beginnings,” chronicling the sculptor’s juvenilia up through the year 1972.

Langland’s wife, Janice, regularly welcomed Jane as a visitor and informal consultant in the early days of Fire Arts in South Bend, while Janice was the organization’s president.

“Jane was so enthusiastic in the ways she supported Fire Arts,” Janice says. “Of course, every time we had a fundraiser, she sent money. That was wonderful, but what’s even better is that every time Fire Arts had something going on, she brought her docents over. She asked us to teach the docents about the processes of casting bronze. If we hosted lectures, she’d have her docents there.”

The Langlands got to know Jane in another dimension after their work as colleagues had mostly ended. For the last couple of years, they were next-door neighbors in their retirement condo.

“With Jane, there were lots of dinner parties, usually featuring her pork tenderloin,” Tuck says. “She was just as good at hosting dinner parties as she was at everything else she did.”

She even curated life at the condo.

“She’d host birthday parties for some of the older ladies,” Janice says.

“She’d get up early in the morning and she’d go downstairs and grab everybody’s newspapers,” Tuck says, “She’d bring them up and deliver them to people’s doorsteps.”