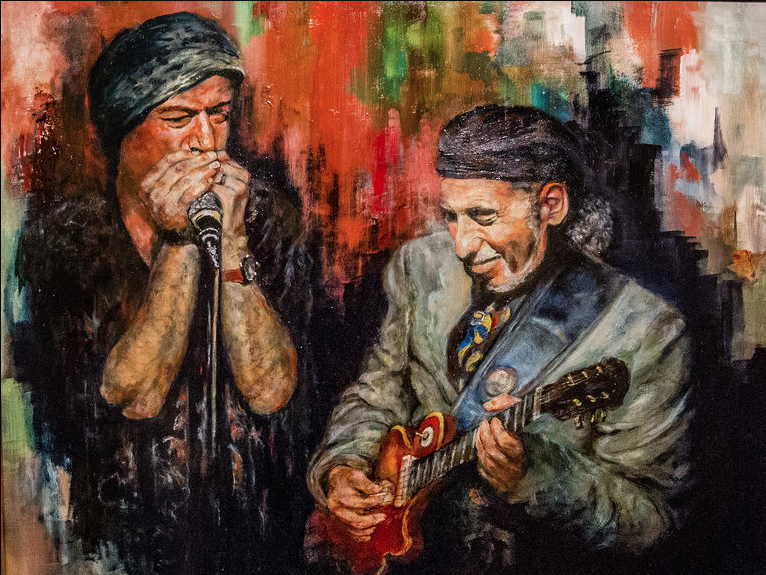 Artist Jerry Ginther thinks his wife would like his work better if it had more color or was more decorative.

“If you looked at the drawing, it’s just kind of one of those bizarre things,” he says about his graphite sketch titled “Looking Back,” which was awarded best in show in the 39th annual Elkhart Juried Regional at the Midwest Museum of American Art.

“It’s not exactly decorative art or colorful art or anything like that. My wife would rather I work toward decorative (art) or art that people would want to hang on their walls,” he says. “It’s just never a direction I really went after. I just kind of pursued my own way of doing things and looking at things.”

Stare at Jerry Ginther’s artwork hanging on the wall at the Midwest Museum and you are actually viewing one of his memories. The longer you look, the more you notice. Faces emerge, objects appear and a story is told.

Although Ginther doesn’t want to give away too much of the inside scoop, he does say the event that inspired his drawing was a talk he gave last year at the very same museum where the work now hangs.

“A lot of my drawings are just very simple things, you know, going to the store, being cut off in traffic, just everyday things, the world around me from my point of view but retelling it from memory and trying to piece that together with imagery,” he says.

“The world around (us)” also summarizes the Elkhart Juried Regional, which continues through Dec. 3 with 155 artists in the exhibit.

“I’ve preached this sermon for more than a decade: This is more than a competition, it is a survey,” he says. “So the judges set out to look at this pool of work and decide what’s happening in Michiana. It amazes me every year. It amazes me. It reconfirms my trust that serious and sophisticated art is being done right here in our communities. You don’t have to go to a big city to find serious artists.”

Byrn says shows such as this give young artists a steppingstone into the art world with their first cash prize. They also offer an opportunity for seasoned artists to show their growth and maturity over time. He also says that many museums don’t offer juried competitions, and the ones that do take from a much larger area.

“Other museums have eliminated these kind of shows all together. Certainly big museums don’t do these kind of surveys or these kind of competitions anymore, and interim-sized museums like Fort Wayne or even South Bend tend to survey much larger geographic regions,” he says and notes that the South Bend Museum of Art’s recent juried competition, the Biennial 29, featured artists from throughout the entire Midwest.

“How is an artist in Osceola going to compete with an artist in Lincoln, Neb., or Chicago or Indianapolis?” he says. “We feel that our constituents that help support this public institution come primarily from Michiana. Artists need this opportunity to find their audience. They found the muse somehow; (now) we need to find an audience to appreciate what they are doing.”

Kaylee Dalton, just a few years out of college, is one of the young artists Byrn refers to. Her piece, “Dark Lush (Landscape),” won the show’s award for best drawing in her second year as an entrant.

“I’m kind of younger and there are a lot of older artists,” she says. “It’s kind of nice to get my foot in the door competing with them, in a way, because they are so established and they’ve been around and doing this show for many years.”

Dalton would like more chances to show more of her work locally, but apart from the Elkhart Juried Regional, there are not many opportunities.

“I’ve been expanding into other shows outside the state, even,” she says. “I think it’s just important everywhere, in general, to have some sort of local art or some sort of support of local arts. A lot of people I talk to about (my) work, they don’t even know that these shows exist or the museum is even downtown. So I really think that it helps getting the conversation going about having more places around here just to view work and see what all of the area artists are creating. A lot of the times, it just gets so hidden. I mean, even some of my pieces are sitting in my basement, so it’s nice to have them be out into the world so other people can enjoy and look at them.”

In light of the limited opportunities young artists have to show their work, Dalton, a native of Elkhart, is grateful for the opportunity the Elkhart Juried Regional presents. She is also appreciative to display her work inside a museum she grew up visiting.

“Oh gosh,” she says. “I remember going there for school and everything. I never ever thought I would actually have my work in there. I’m just so grateful that there is this show. People look forward to it every year. I feel like we get really excited when it’s this time. It’s a big deal for us artists around here. I just wish there were more shows like it.”