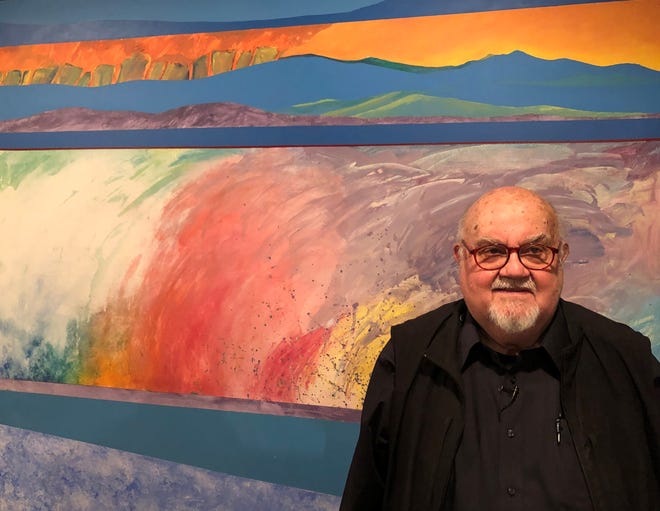 87 and still ‘painting up a storm’

The 87-year-old painter, print maker and sculptor even quips about it, saying, “I grew up with a lot of gray clothing, and color wasn’t on the docket as a Mennonite.”

On one of his visits with New York artists, he recalls: “What I noticed in New York is that they were all wearing black. I left the Mennonites to find color.”

The irony melts as he explains: He simply doesn’t want his clothing colors to compete with his art. This respect for hues is a key thread in his latest exhibit, his latest at Elkhart’s Midwest Museum of American Art, which runs through July 25: “Abner Hershberger: The Abstraction of Landscape.”

His 36 pieces here, now a part of the museum’s permanent collection, span from 1958 to 2016 and show how he progressed from Realism to Abstract. The varying patches of color and texture and the angular and curving lines feel like sweeping rides through the rural Midwest, plus his Italian sabbatical, and they all stem from a childhood rooted on a North Dakota farm. BY

One telling piece that he created in 1997, an acrylic screenprint titled “Boy with Milkweed Pod,” shows him as an 8-year-old boy in one panel, next to a print of milkweed, which is above a dove (signifying peace) that hovers over a typical coil of barbed wire found on a farm.

He’d collected milkweed as a boy as World War II raged. The silk was used to make life-saving jackets for the military. In a way, he has said in the past, it defied his faith’s anti-war stance, and yet it also affirmed life.

His father was a minister, having moved the family to North Dakota from Abner’s birthplace in Nebraska, and two of his brothers got deferred from the war draft so they could do farm work as conscientious objectors.

But, as he grew, Hershberger said in recent a talk at the museum, he “quarreled” with something that Mennonites often talked about — “being in the world but not of the world.”

“I wanted to be part of the world, of the art and excitement,” he says.

He’d started doing art as a boy, discovering the “thrill” of color when a second-grade teacher gave him colored chalk with which to draw. He would go on to complete his bachelor’s degree in art from Goshen College and earn master’s degrees in art from Indiana University and the University of Michigan.

More:Explore more about artist Abner Hershberger at his website.

His early experiences, though, still influence his art. In at least one abstract lithograph, he says, “I wanted the cornstalks to be up close” — just the way he’d seen them while riding a tractor through crops on the family’s 640-acre farm.

“I consider Abner one of the few serious abstract artists of northern Indiana,” the museum’s director, Brian Byrn, says.

Hershberger has had a “powerful impact” on artists, Byrn says, both through at least 39 years of teaching and in his relationships with other artists. Hershberger, after all, had taught art at a Jefferson Township school near Goshen from 1960 to 1964, then became an assistant professor of art at Goshen College, where he’d retire as an art professor in 1999. Hershberger had taken the art education program that his Uncle Ezra started at the college and, Byrn says, brought it “into the 21st century.”

Byrn says he’d eventually like to take this exhibit on the road.

Likewise, Hershberger, who has exhibited around the country, says he’s still “painting up a storm” and is open to new exhibits.

In one piece, Hershberger describes how his colorful patches — each representing an element of the earth or sky — “seemed to float” on the canvas. That, he says, is an abstract way to express space without the usual vanishing point, like when telephone poles grow smaller into the distance.

This tactic repeats itself in his works.

Painting is a “very lonesome job,” but, he says, he’s quenched his thirst to “connect with others” through printmaking where artists need to work as a team. Someone needs to help with the press, the acid bath and so on, and it’s often done in a group work space. That, he says, he could do well because he was one of 10 kids who shared everything, including an oil stove, chamber pot (no indoor toilet) and beds (he was often the middle sleeper of three).

When an audience member asks how he promoted his art early in his career, he replies that he was breaking away from the realism that his community generally favored. But, he adds: “We were in the age of jazz. I felt the continuity between jazz and abstract painting. It represented the present.”

All of this got its start when a young, farm-dwelling Hershberger felt a restless desire to explore colors, then, later in his career, the abstract.

He believes: “There is something in the human spirit that wants to fulfill those pockets that are not quite complete feelings we have.”