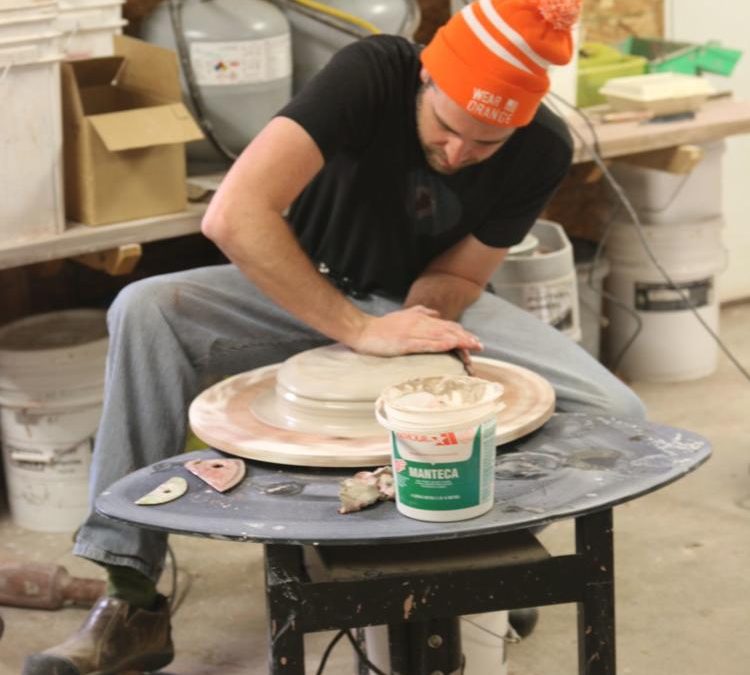 ELKHART — For a year, Justin and Brooke Rothshank worked alongside each other as spouses, as artists, exploring gratitude.

Once a week, she’d produce a miniature watercolor painting less than an inch square. He’d produce a piece of pottery.

The results from what they did together from their studio and home on 20 acres east of Goshen are on display at the Midwest Museum of American Art through Dec. 29.

Their artistic expressions showcase talent that has gotten them global attention and sales, but also a window into their lives. He’s a potter who innovates by using decals to showcase imagery on the glazed clay. She’s a miniature painter who has worked at 1/12 scale for collectors who started putting her watercolor miniatures on Instagram on a daily basis in 2016.

During that year, they experienced the death of a grandmother and other close family members. Their third child was born early and stayed in the neonatal intensive care unit for an extended period. They felt the world’s political and environmental turmoil, according to their artist statement on the exhibit at the museum. During that time, Brooke heard Brother David Steindl-Rast ask on a podcast, “Can you be grateful for everything?” In his TED talk, he said, “It’s not happiness that makes us grateful. It’s gratefulness that makes us happy.”

They had been talking about doing a project together. Book publisher Parallax Publishing saw her work on Instagram in 2016 and wanted a book from it, but she’d already sold some of those daily paintings. So The Gratitude Project became a book along the way as well. “Tiny Gratitudes” is available from booksellers for $18.95.

“We needed to do that project,” she said. She simply painted something for which she was grateful. On Jan. 1, it was a candle. Nine days later, it was a clock that is a family heirloom. The following weeks included food, pets, fruit and one of Justin’s cups as they celebrated their 15th wedding anniversary.

Meanwhile, Justin was making pots. His favorite from the year were cups using IRS tax forms as decals after a week of doing taxes with the help of their accountant.

The showcase inside the front door of the museum showcases how two professional artists incorporate their lives into their work, said Brian Byrn, museum director/curator. “They had made this commitment, intellectual commitment,” said Byrn, who is a mentor of Brooke’s since she interned there as a Goshen College student. “I said this is a story that needs to be seen and told.”

They balanced the project with parenting their children, with producing work they could sell, with teaching fellowships around the country. They have a business model that includes living in this northern Indiana community and making a living by selling work more broadly, said Byrn.

The internet makes it possible for them to connect with fans and buyers so that they can make a living. “We can connect globally from a rural home base,” said Brooke.

Justin said it was a combination of “dumb luck and timing” that helped harness the internet as artists. He used MySpace while still working in Pittsburgh and had one of the first Etsy stores. Now you can find their work at https://rothshank.com/. Her use of Instagram starting in 2014 has resulted in her having more than 85,000 followers.

He’s 40 and she’s 41 and they have figured out how to blend digital marketing and sales into their work as full-time artists. Their work and the intention with which they live is remarkable and inspiring to others.

In 2019, they intend to focus together on “intention,” which they explain is different than setting goals. They will make a piece a week about the process of working towards things they find important and how that unfolds, he said.

Like The Gratitude Project, those small acts accumulate into a larger work.

“It’s a practice and no practice is perfect,” he said, “but it’s the effort that matters.”

The Gratitude Project is on display through December 29 at Midwest Museum of American Art, 429 S. Main St., Elkhart. Also on display is the 40th annual Elkhart Juried Regional, which has 203 works of artists from Indiana and Michigan. Those were selected from a record 442 submissions this year. Many of those works are on sale and more than $30,000 in awards were given this year, according to Brian Byrn, director/curator.